The Ailie Cullen Memorial Prize  may be awarded to the performer or group of performers who, in the opinion of the adjudicators, gives the most outstanding performance of the Festival.  The prize will be approximately £500.  Towards the close of the Festival, eligible performers selected by the adjudicators will be invited to take part in the Ailie Cullen Memorial Prize Concert which is part of the Last Night of the Festival. Full details of the eligibility criteria for this award may be obtained from the Secretary. 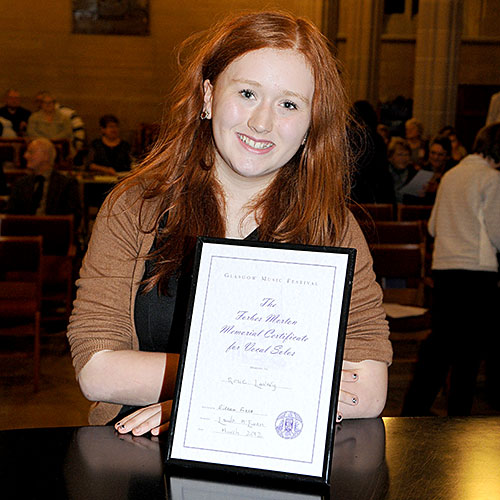 The Hugh S Roberton Memorial Trophy and a Glasgow Orpheus Choir Trust Award of £100 may be presented to the most outstanding performer, under 14 years of age on 1 March 2023, in Vocal and Instrumental Classes. Eligible performers will be invited by the adjudicators to take part in the Last Night of the Festival.

The Agnes Duncan Trophy: An award of £100, generously gifted by Soroptimist International
– Glasgow City, will be presented to the winner of the Agnes Duncan Trophy. Performers
giving the most meritorious performances in classes 64-71 may be invited to take part in
the Last Night of the Festival.

The Lillian Campbell Memorial Prize may be awarded to the winner of the Piano Solos Premier Class.  The prize is £100.

The Grace Dick Memorial Prize may be awarded to the winner of the String Solos Premier Class.  The prize is £100.

The Janette Clanahan Memorial Award for the most meritorious performance in the 18
and under classes for Opera and Oratorio;

The Gary Wallis Memorial Award for the most meritorious performer aged 15 to 18 in
Songs from the Shows;

The Christopher and Maureen Hopkinson Award for the most promising performance from musicians of primary school age (aged 12 and under on 1 March 2023) in instrumental and vocal solos.

The following trophies will be awarded for the performance which, in the opinion of the adjudicator(s), is the most meritorious in the class or classes shown, provided 85% or more of the available marks has been gained.